STAR WARS-themed BE@RBRICKS. Tis either you hate them, or absolutely adore them. Tis one thing when they've been KUBRICK-tized [tagged] while retaining a semblence of their iconic character-designs, but another when said individual designs are conformed into a singular platform shape - so it either comes off like a parody, or cuteness-personified. Personally speaking - with the exception of Yoda (who really hurts my delicate eyes) - everyone else shown here looks pretty darn nifty, IMHO :) 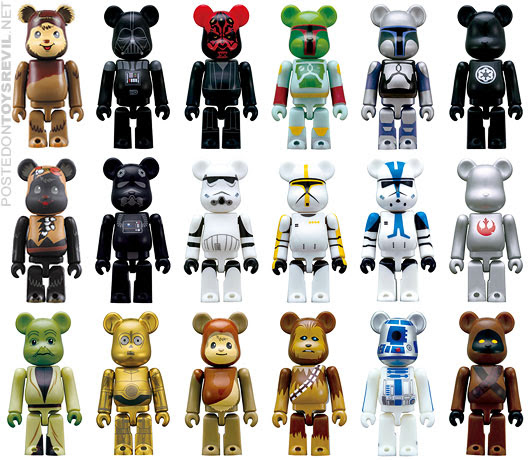 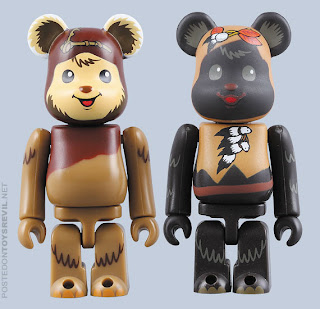 - Paploo was actually peeped in 2007's Medicom Toy Exhibition (along with an entire clan of Ewok-bricks)
- Wicket was seen in Animated-design only recently.


The previously blogged about PEPSI NEX STAR WARS BE@RBRICKS [www] consists of a whopping 16-designs/characters to collect - and all at 70%-size! (ie: 5cm / x-inches tall) - which frankly, makes it even more disgustingly-adorable LOL - and yes, they are still given free together with a 500ML pet bottle of PEPSI NEX (and no, I don't think the drink will come along with the figure in online-auctions :p). the SW-BE@RBRICK onslaught starts July.

On the side, I'm also were curious about the level of popularity of the different groups of Star Wars-characters - and without any scientific nor statistical data to back me up, here is what I personally think are the different levels of SW-Character fan-fav popularity (most popular on-top):

Anonymous said…
Stunning writeup mate.
the Star Wars 30th celebration this year is going to be amazing, just wish I was there!

I reckon the pepsi Nex promo of these will be almost as cool.