In anticipation of it's October 20th premiere, a new featurette for "Watchmen" on HBO delves slightly more into what the upcoming new tv series is about, beyond the exceedingly veiled visuals unleashed unto the www so far.

"Watchmen examines how we as a society feel about heroes, most notably people who wear masks and fight crime."

"Watchmen" is based on the graphic novel co-created and illustrated by Dave Gibbons and published by DC (*notice "Alan Moore" is no longer credited or mentioned, because he specifically asked not to be...), while series creator Damon Lindelof mentions that this show adaptation "honors" the graphic novel, but not you need not have read the comic book to enjoy, for this show which is essentially a "alternate U.S.A.", where "there is a vast and insidious conspiracy at play." 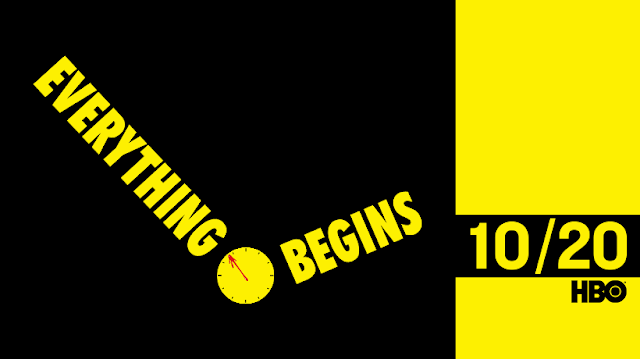 PREMISE: "Watchmen takes place in an alternative, contemporary reality in the United States, in which masked vigilantes became outlawed due to their violent methods. Despite this, some gather around in order to start a revolution while others are out to stop it before it is too late, as a greater question rises above them all; who watches the Watchmen?"

SETTING: "The series takes place in Tulsa, Oklahoma in an alternative reality in 2019—one with no internet or smartphones — 34 years after the comic ends. Robert Redford is the longest-serving President of the United States, having been elected in 1992. After a white supremacist group that calls themselves "The Seventh Cavalry" (wearing homemade Rorschach masks) commits simultaneous attacks on the houses of police members, the police start wearing masks." (Wiki)